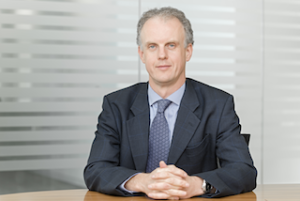 As we learned from the recent financial crisis, systemic issues can wreck portfolios and undermine investor confidence for years. For many, climate change is emerging as a major systemic issue facing investors: Economic damage from extreme weather and shifting climatic belts is likely to get worse, and governments are unlikely to sit on the sidelines. Investors need to act now, developing a coherent, flexible strategy to manage the risk of intervention from governments around the world.

The “unburnable carbon” issue has become polarized. Those who advocate full divestment are seen by many as extreme, particularly because divestment entails the willful avoidance of dividend streams and a risk of underperformance if energy prices rise. However, recent statements made by fossil fuel exploration and production companies to challenge the analysis behind stranded asset risk and/or to downplay its significance have been less than persuasive.

Asset owners are increasingly frustrated, particularly if they are faced with rising stakeholder pressure to reduce exposure to fossil fuels. Although there have been a few high-profile announcements of wholesale divestment, for the vast majority, the default response is to do nothing and wait for further developments.

Polarized responses are irrational for two reasons. First, recent developments in science and policy have had a major impact on the climate change issue, recasting it as a risk rather than an uncertainty, thereby facilitating the use of traditional investment management tools, particularly asset allocation. And second, developments in energy efficiency markets have created options for investors to mitigate some of the risks implied by divestment.

Investors struggle to deal with uncertainty when the magnitude and timing of a potential impact cannot be readily estimated. In the recent financial crisis, many investors sat on their hands because they were unable to assess the likelihood of a shock to the system. In contrast, when magnitude and timing can be estimated, the potential impact is usually categorized as a risk. Investors are typically comfortable with incorporating risk information into their decisions, particularly regarding the level of allocation to different types of assets.

For many years, the mainstream investor reaction to climate change has been that the science and the likely policy response have been too uncertain to justify action. However, the UN Intergovernmental Panel on Climate Change report of September 2013 reported a strong scientific consensus on the causes of climate change and the likely consequences for the planet of the current rate of greenhouse gas emissions. Subsequent announcements from both the United States and China of specific plans to limit emissions of carbon dioxide have materially raised the chances of policy intervention, potentially on a pan-regional scale. Investors can now legitimately consider scenarios in which major economic blocs pass legislation to restrict CO2 emissions within the next decade, for example through a significant “Carbon Price,” which will affect the economics of both energy producers and consumers.

Toward an Investment Response

Investors generally have one of three responses to higher levels of risk (individually or in combination): Lower exposure to the assets concerned; reduce the risk; hedge the risk.

Faced with a material probability of a carbon price within a decade, a timescale that matters for decisions taken today, it is rational for investors to lower their exposure to assets that could be affected. On the one hand, it is likely that the effect on today’s valuations of these lower wholesale prices is “drowned out” by myriad other drivers of prices, including political risk. On the other hand (as shown in Figure 1), a carbon price may render those assets with a higher marginal cost of production “stranded,” or potentially worthless. It is these assets that should be targeted for selective divestment. 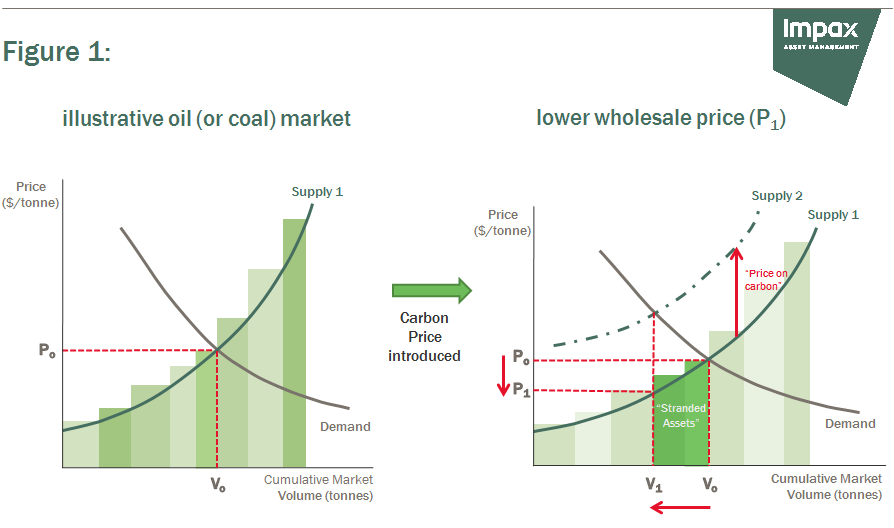 To mitigate risk, investors should challenge the management teams that oversee assets whose fortunes could be improved by a change of strategy, for example oil majors that could cut back on capital expenditure into high marginal cost assets, possibly with a commensurate increase in dividend levels.

Although the wholesale energy price is depressed by a carbon price, the retail energy price can be expected to rise (Figure 2). By reinvesting the proceeds from selective divestment of fossil fuel assets into energy-efficiency-related business opportunities, investors not only hedge the risk that they miss out on future energy-price rises, but also create exposure to energy prices that should increase in line with government intervention to limit greenhouse gas emissions. 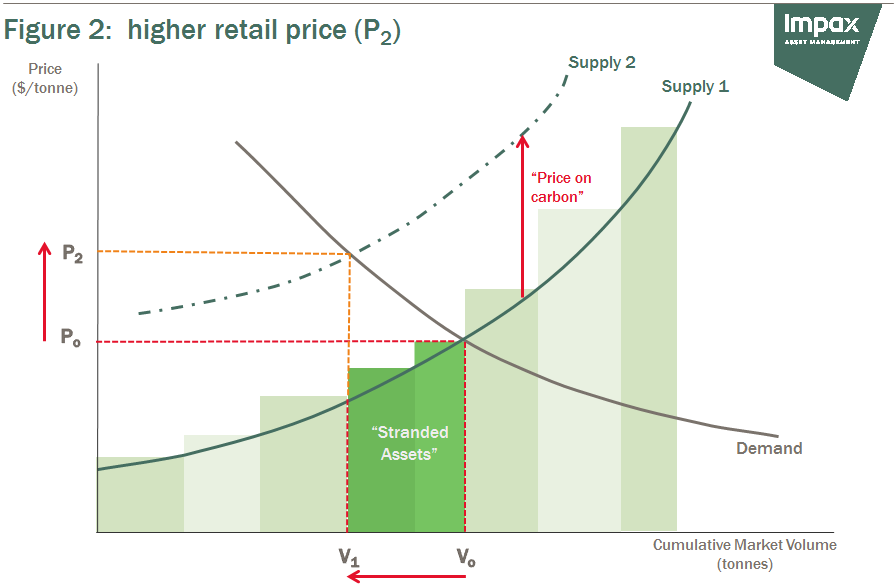 Taking a risk-analysis approach to the impact of future climate-change policy, investors may rationally decide to reduce their exposure to fossil fuel assets rather than to undertake full divestment. We recommend that a plan of action include four components. First, examine individual assets to determine their marginal cost of production (and thereby their potential exposure to carbon pricing); this is likely to be difficult except for discrete assets or for companies with high levels of disclosure. Second, develop scenarios for the level of carbon prices and the probability and timing of their introduction; we recommend a simple model to start with that can be developed further as circumstances change. Third, divest in line with the probability-weighted loss per asset, that is, multiply the loss per asset in the scenario by the probability of the scenario occurring; this will be far from an exact science, so it makes sense to start with conservative assumptions, that is, a relatively low level of divestment. Fourth, consider reinvesting the divestment proceeds into the energy efficiency sector; this may introduce additional risks, for example exposure to the industrial capital expenditure cycle.

At the heart of this issue is the scarcity of useful data, particularly around marginal production costs. Alongside their divestment plans, investors should request additional information from the companies they hold and consider supporting wider initiatives to persuade stock exchanges and financial market regulators to oblige companies to provide further disclosure, for example in prospectuses and annual reports.

Policies to reduce greenhouse gas emissions aren’t developed in a vacuum. We won’t wake up one morning and discover that a material carbon price has been imposed overnight. Nevertheless, governments have a nasty habit of ratcheting up their intervention to solve important policy problems, so investors who can anticipate government action and take preemptive measures to protect themselves are likely to outperform.

Ian Simm is the founder and chief executive of Impax Asset Management Group plc. Ian has been responsible for building the company since its launch in 1998, and continues to head the listed equities and real assets investment committees.

Prior to founding Impax, Ian was an engagement manager at McKinsey & Company, where he advised clients on resource efficiency issues. In 2013, he was appointed by the Secretary of State (Senior Minister) for Business, Innovation and Skills as a member of the Natural Environment Research Council (NERC), the UK’s leading funding agency for environmental science. He has a first class honours degree in physics from Cambridge University and a master’s in public administration from Harvard University.